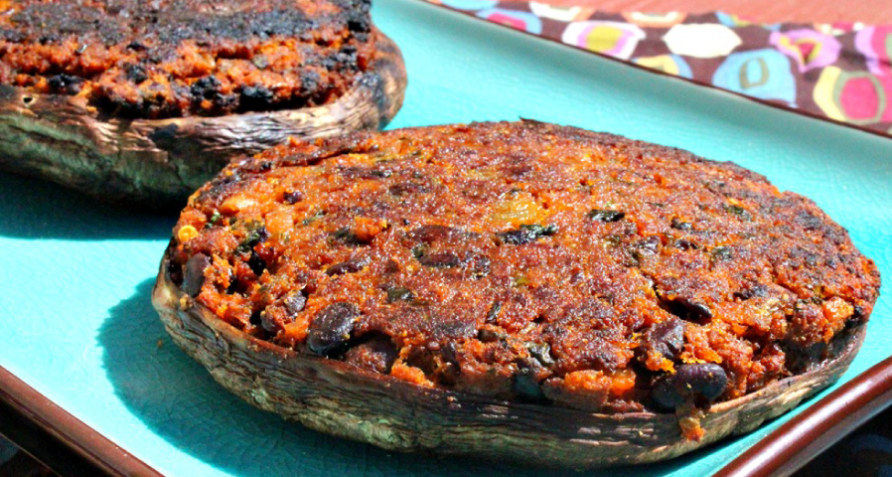 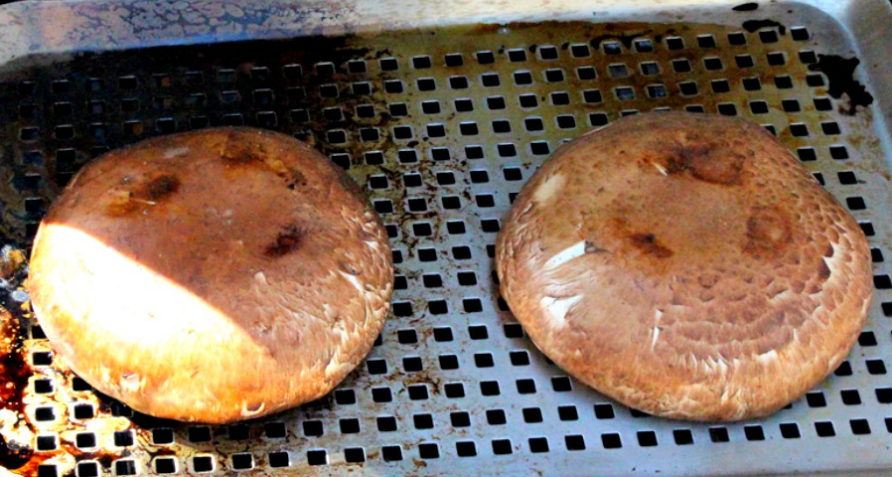 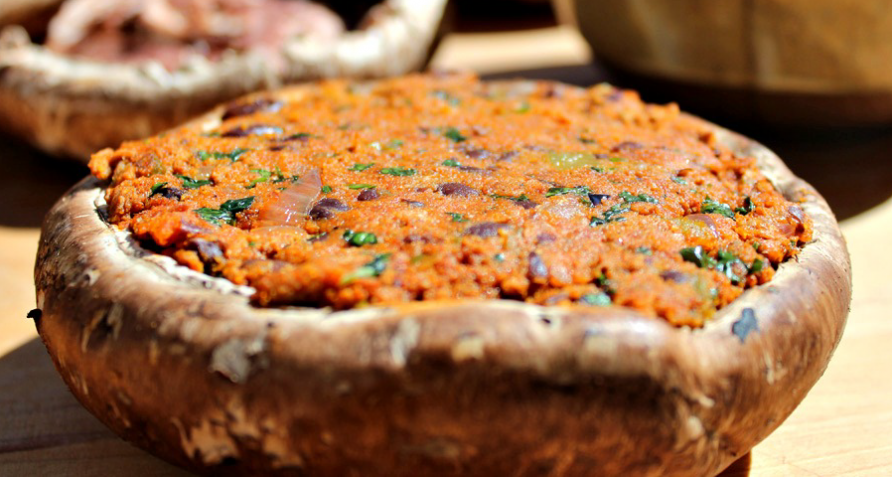 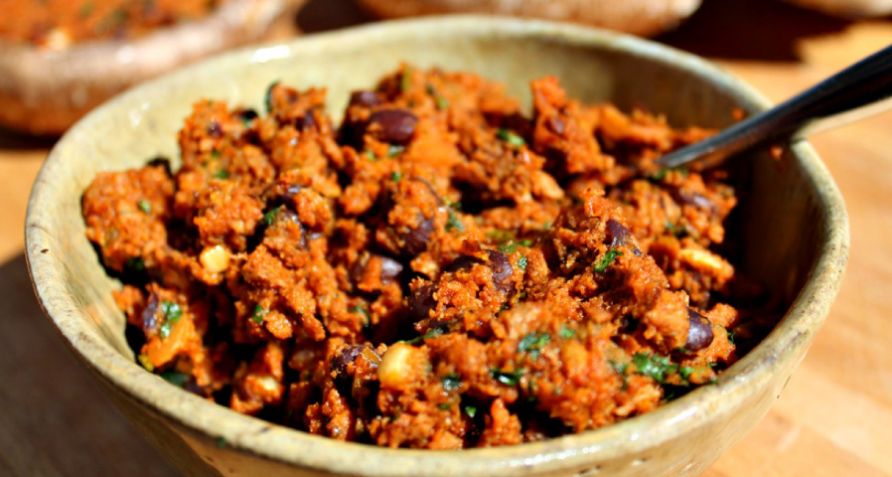 Since May is burger month, I thought it was only fair that even our non-meat eating friends should be able to participate in the burger grilling festivities!

I have been known to be enticed by a good veggie burger – on its merit alone, not as a substitution for the real thing. ;-) The problem that I have with most veggie burgers is that they usually don’t hold together very well (mushy) and if they do, they are often kinda dry and chewy (or manufactured, ugh).  For those not wanting a meaty meat burger, the other usual suspect generally ends up being a grilled portobello mushroom. While grilled portobellos deliver the umaminess (yes, that’s a made up word) of a traditional burger, they fall a bit short on heft and burgery texture.

The idea for this burger started when I was making chorizo stuffed mushroom caps for a party appetizer. Since I was making a couple hundred of these things, my mind started to wander (as it is prone to do) and started thinking about the deliciously spicy scrambled eggs with soyrizo I had a few weeks back. Hmmmm… if I use soyrizo, I could easily make this appetizer vegetarian. Cut to a couple weeks later when a friend asked me about veggie burgers… Light bulb!

The main flavor component in this Southwestern inspired burger is soyrizo, a vegetarian alternative to Mexican chorizo. For those not in the know, chorizo is a highly seasoned fatty pork sausage. If you live outside California or the Southwest, you are most likely more familiar with Spanish chorizo which is fermented, cured and then smoked to preserve it. Mexican chorizo is made with fresh pork and is loose when removed from the casings. Soyrizo is a great substitution for (and sometimes better than) the real thing and is pretty widely available in larger supermarkets or natural food stores where meat alternatives are sold; I used the Trader Joe’s version.

I know that this looks like a lot of ingredients, and it is. But is comes together pretty quickly and the mince will freeze well if you don’t use it all. Make some extras to take to your next cookout because the carnivores will want to get on these!

Method: Direct grilling (or bake in the oven)

Heat the oil in a large saute pan over medium-high heat. Add the onions, garlic, and jalapeno; saute until onion is translucent – about 4 to 5 minutes. Add the tequila and let it bubble for a minute to burn off the alcohol. Crumble in the soyrizo, then stir in the green chilies, black beans and spices. Saute for 5 minutes until well combined and heated though. Transfer to a large mixing bowl and let cool enough that you can put your hands in it. Add the remaining ingredients and smoosh though your clean fingers and hands until well combined.

Press the mixture into the mushroom caps and make level.

Preheat grill and grid to medium-high. I used a grid, but they were pretty sturdy, so I don’t think they will fall through the grates if you don’t have a grid. Rub some veg oil on the grid before you start cooking. Lightly brush the tops of the burger (top being the soyrizo side), and place topside down on the grill.

Cook for 5 minutes until there is a nice crust formed on the top of the burger. Flip and cook for another 4 to 5 minutes. Serve hot on their own or build a fantastic burger!