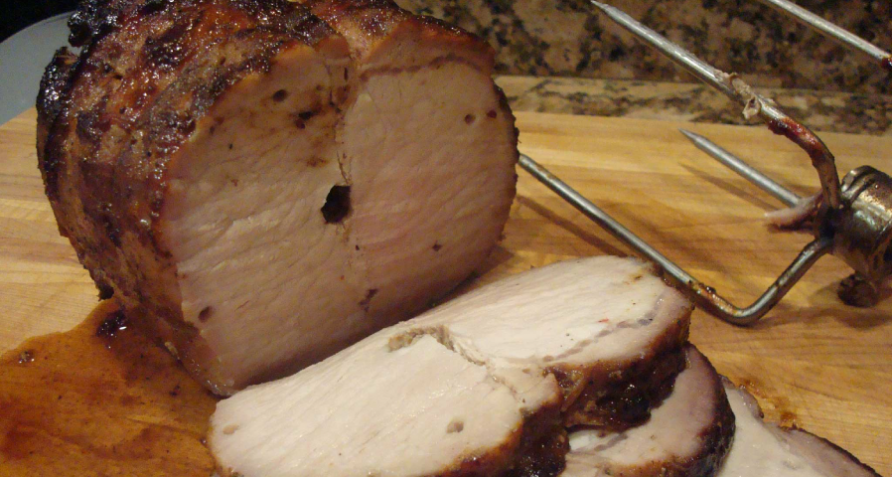 I am fortunate to live in southern California where it’s never too cold to grill.  I know that a lot of you are buried under a little snow right now, but hopefully you haven’t stowed away your grill… I want to start the 2013 grilling season now with our Winter Grilling series of recipes.  Even in the bone-chilling 40 degree temperatures of Los Angeles (I know what you’re thinking), I don’t want to be standing outside flipping pork chops either.  This winter we’re going to concentrate on foods with longer cooking times and mostly use indirect heat and/or rotisserie cooking.

BTW – I’m pretty in love with the rotisserie right now!  Did you know that until the invention of the kettle shaped grill, indirect cooking of large pieces of meat wasn’t all that easy because of the way the grills were shaped?  Once you got the meat on the grill, it couldn’t be covered because of the size of the meat.  Rotisserie grilling was really the only way to cook roasts over fire.  The constant rotation of the meat not only cooks the meat evenly, but it also bastes in it’s own juices making it extra meaty flavored… and really,  isn’t that what we’re after?

So on to the Pork Loin with Moroccan Spices… specifically, a spice blend calledras el hanout.  This blend is the Moroccan answer to Indian curry powder and translates to “top of the shop”.  Ras el hanout is a blend that contains somewhere between twenty and twenty-five different spices and is generally a proprietary blend of the spice merchant and is meant to represent the very best the merchant has to offer.  It contains a lot of warming spices (cinnamon, cloves, ginger, cumin, cardamom) so I think it’s perfect for our winter grilling!  It is most often sold pre-ground, but I like to buy it whole and grind it myself because whole spices last longer and I prefer to use whole spices in brines.  If you enjoy playing with spices, you don’t want to miss this.  Unfortunately, you’ll most likely have to buy it online.  World Spice Merchants is one of the few places that you can buy the whole spice blend.

(If you want to try this recipe without waiting for the spices, substitute a cinnamon stick, bay leaf, and whole peppercorns in the brine.  For the rub you can sub-in 1 teaspoon each of curry powder, chili powder, and pumpkin pie spice for the ras el hanout, but I would urge you to get the spices.)

Tie together the pork loins securing them with butcher’s twine every couple inches. Even up the loins by trimming the ends.  Better yet, have your butcher do this for you.  Place the loins in a large resealable bag.

For the brine: combine 1 quart of water, salt, brown sugar, spices, onion, and orange in a large sauce pan.  Heat and occasionally stir until salt and sugar have dissolved.  Here is a little trick to cool your brine liquid – for the second quart of water, I fill up a 1-quart measuring cup with ice and then add enough cold water to measure 1 quart; stir into brine mixture to cool it instantly.  Pour into the bag with the loins.  Squeeze out the excess air and seal the bag.  Brine in the refrigerator at least 4 to 5 hours, but preferably overnight.

When ready, remove the pork from the brine and discard the brine. Rinse the loins under cold water, pat dry and let sit at room temperature for 30 to 60 minutes. Meanwhile prepare the rub by first grinding the ras el hanout. I use a coffee grinder that I reserve for spices, but you can use your coffee grinder. (To clean your grinder after you have ground the spices, put in a couple tablespoons of rice and grind that up to remove residual oils left from the spices.  Honestly, I think any leftover traces of the spices would be delicious in coffee!) Stir together the ground ras el hanout, black pepper and orange zest. Remove 1 teaspoon and reserve; then season the meat with the remaining rub.

Prepare the grill for indirect/rotisserie cooking by lighting the infrared rotisserie burner to medium-low and the outer burners to medium.  The inside temperature of the grill should be 350°F to 375°F.  The idea is to cook the meat slowly so that it is the same degree of doneness all the way through.  Place a drip pan in the center below the meat.

While the grill heats up, prepare the glace by combining the glaze ingredients in a small pan just until the preserves melt.

Skewer and center the meat onto the spit and secure tightly by tightening the screws. Place the loaded spit onto the motor, over the drip pan. Start the rotisserie and cover the grill. Depending on your grill (and how cold it might be outside), the roast will take somewhere between 50 to 90 minutes (15 to 20 minutes per pound). After 40 minutes or so, stop the rotisserie motor and check the internal temperature with an insta-read thermometer to gauge how fast it is cooking; be sure not to touch the metal rod.  Once the roast hits 135°F, turn off the outer burners, turn motor back on, and turn the rotisserie burner up to high.  Leave the cover open and baste the roast often with the glaze until the temperature of the meat hits 140°F  I like my pork between 145°F and 150°F; the temperature will continue to rise another 5°F to 10°F while the meat rests. Obviously, leave it on longer if you like it more well-done, but don’t start glazing until you’re 5 minutes away from removing the meat from the grill. You want the sugars in the glaze to caramelize, but not burn.

Turn off rotisserie motor and transfer the spit and roast to a cutting board.  Leave on the spit.  Tent the roast loosely with foil and let rest 15 minutes before removing the spit.  Brush with additional glaze before slicing and serving. and slicing.