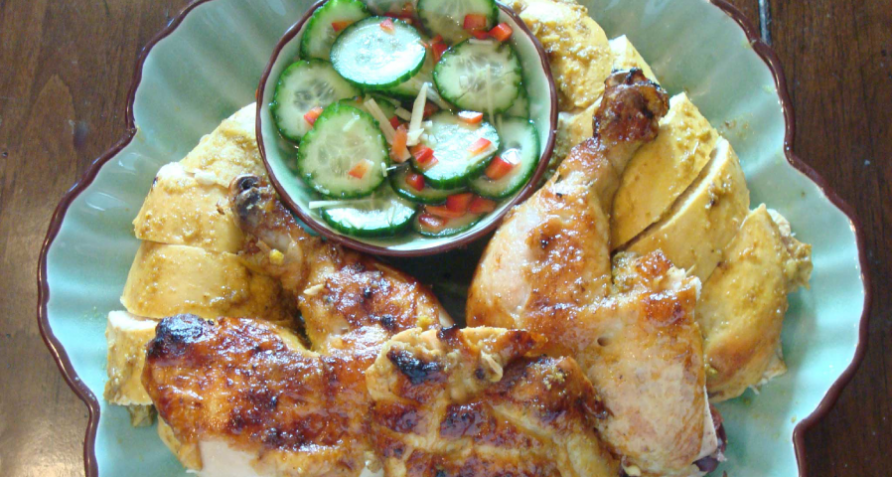 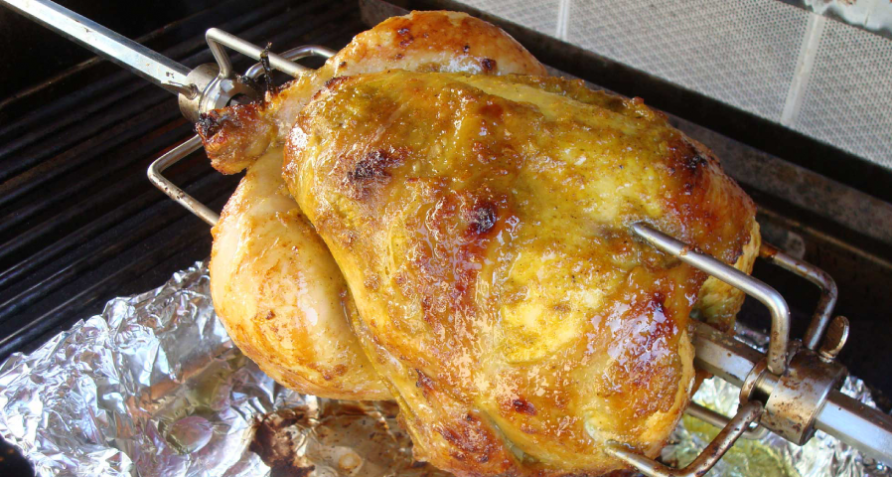 'Wishing that I was in Thailand' Rotisserie Chicken

A couple years ago I finished an extended contract with a “food show personality” that had me writing 20+ cookbooks and TV show recipes.  I needed a change, so I headed to Koh Samui, a tiny south Thailand island, to attend a three week professional intensive in Thai cooking.  That’s a whole other story and this is not a travelogue.  However, one of the many things about that trip that amazed me  <

Combine yellow curry paste, garlic, cilantro stems, lemongrass, sugar, and white pepper in a food processor and pulse until you have a paste. Then blend in the remaining ingredients. Place chicken on a sheet pan and loosen the skin around the breast. Take a handful of the marinade and rub it under the skin. Transfer the chicken to a large resealable bag and pour in the remaining marinade. Massage marinade in and around the chicken; squeeze the air from the bag and seal. Marinate in the refrigerator for 4 hours to overnight.

Remove from refrigerator and hour before firing up the grill; remove from the marinade and pat dry. Truss the chicken for even cooking — if trussing is too much, then tie the drumsticks together and tuck the wings under behind the back.

For Asian pickled cucumber: Stir together the vinegar, sugar, and salt until the sugar and salt dissolves. Place sliced cucumbers and chilies in a bowl and pour over vinegar mixture. Let soak for 1 hour or until ready to serve. Do not make more than a couple hours in advance.

Prepare the grill for indirect/rotisserie cooking by lighting the outer burners to medium. The inside temperature of the grill should be 300°F to 350°F. Place a drip pan in the center below the bird leave the grates off giving the chicken plenty of room to spin freely.

Skewer and center the bird onto the spit and secure tightly by tightening the screws. Place the loaded spit onto the motor, over the drip pan. Start the rotisserie and cover the grill. Depending on your grill (and how cold it might be outside), the chicken will take somewhere between 75 to 90 minutes.  The chicken can also be cooked directly on the grill on a grilling grid with indirect heat.   After 60 minutes or so, stop the rotisserie motor and check the internal temperature with an insta-read thermometer to gauge how fast it is cooking; be sure not to touch the metal rod. Once the breast hits 160°F and the thigh registers 175°F, turn off rotisserie motor and transfer the spit and roast to a cutting board. Leave on the spit. Tent the bird loosely with foil and let rest 10 minutes before removing the spit. Cut away the string used for trussing and cut the chicken into serving pieces. Transfer to a platter and serve with pickled cucumbers.