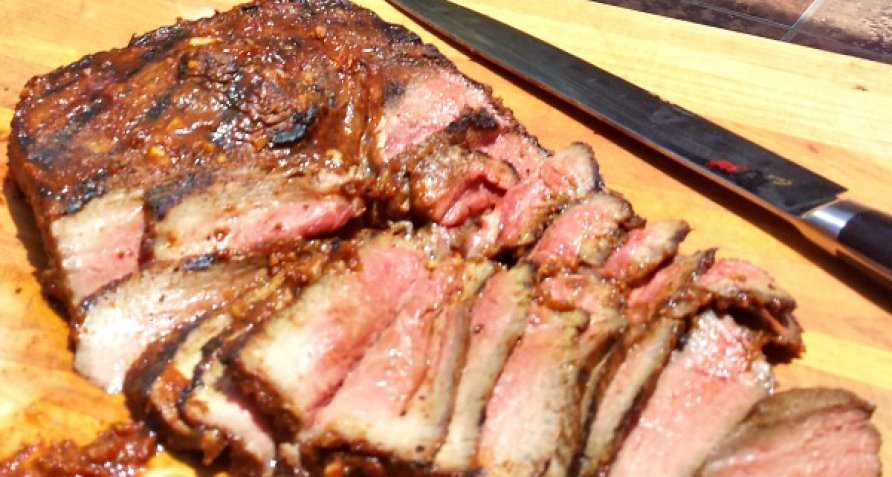 London broil is more of a designation than an actual cut of meat. It is generally applied to various thick cuts of meat which may or may not necessarily come from the same part of the cow. Everything from bottom round, top round, shoulder and sirloin tip gets called London broil – I guess it just sounds sexier than miscellaneous hunk o’ beef. (BTW – it has nothing to do with the London, The Queen, or anything else in the U.K.)

The common denominator(s) among the cuts called London broil is that they are usually pretty lean, have a great chew to the texture and should always be thinly sliced across the grain. London broil is big on beefy flavor and really stands up to lots of seasoning and a good long soak in a marinade to let that flavor penetrate.

Don’t overcook it! Just like other lean cuts of beef, London broil does not do well when cooked much past the rarer side of medium. If you like your meat pink-less, this is not the cut of meat for you.

Bonus: London broil is always on sale during grilling season!

I’m using a top round that I have marinated overnight in citrus juices, tomato paste, a lot of garlic, cumin, and chipolte powder for a little smoky spiciness. Grilling it over mesquite lump charcoal makes it just that much better.

Whisk together the remaining ingredients. Place London broil in a large resealable plastic bag and pour in the marinade. Massage around to make sure the meat is completely coated. Squeeze out excess air from the bag and seal. Marinate overnight in the refrigerator, flipping at least once.

Set up grill for direct heat cooking over high heat. Brush and oil grate before cooking.

Remove the London broil from the marinade; reserve the marinade. Pat the steak dry with paper towels and season with salt and pepper then rub with a small amount of oil.

Pour marinade into a small saucepan and bring to a boil, reduce heat and simmer for 3 minutes. Remove from heat and use to brush on steak while grilling.

Place steak on grill and cook about 5 to 6 minutes, flip and baste with heated marinade and cook for another 5 to 6 minutes for medium-rare or an internal temperature of 130°F to 135°F.

Transfer to a cutting board and let rest for 10 minutes tented with foil. Thinly slice across the grain for serving.