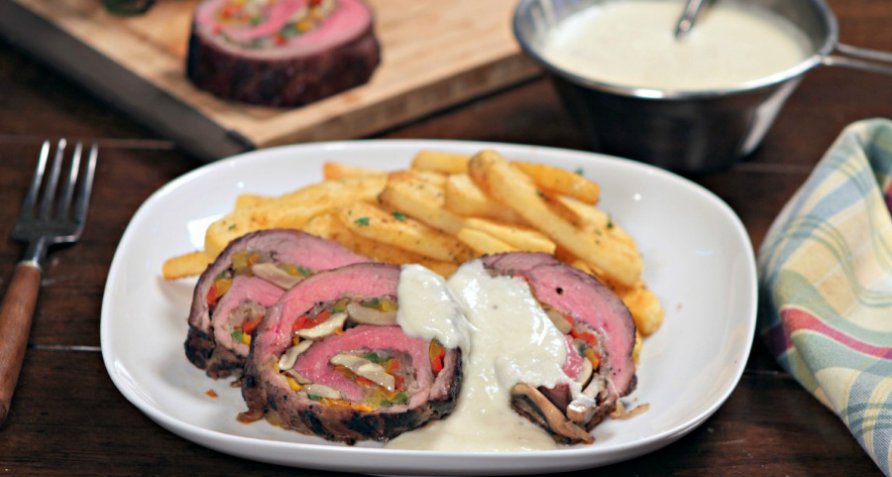 Now that the turkey-induced sleep coma of November has worn off, I think it’s time to get our red meat on! Every year, whether beef or lamb, red meat is what I tend to gravitate toward during December in that last ditch effort before I start thinking about New Year resolutions. It’s a vicious cycle.

I have a few beef and lamb recipes up my sleeve for this month. There will be both quicker cooking recipes and for those of you who can’t wear shorts in the winter, there will be recipes with longer cook times to minimize time spent out in the cold. Regardless. I will add alternate indoor directions for each.

When you think of a Philly Cheese Steak Sandwich, the the hoagie roll is not the thing you remember the most. I live in SoCal where bread is a dirty word… whatever. At any rate, here the best parts of a cheese steak sandwich – caramelized onions, peppers and sautéed mushrooms – are all rolled up in a beefy tender flank steak!

I took the idea of the melted slices of provolone and turned it into a simple creamy cheese sauce; you could certainly substitute American or cheddar. If you are wanting to prep this at home to be grilled off at the stadium and don’t want to deal with the sauce, simply layer sliced cheese on top of of the meat with the vegetables before rolling.

This looks like a long recipe… and I guess it is, but a lot of it is explanation. However the total prep time is only about 30 minutes. and can be done ahead

For the cheese sauce:

Cook’s Note: I used two large skillets here. One for the onions and the second for the peppers and mushrooms to cook while the onions caramelize.

Caramelized onions: Melt butter in in a large skillet over medium-high heat. When the butter stop foaming, add the onions and saute until golden brown; about 15 to 20 minutes. Remove from pan and set aside to cool.

Peppers: Add 2 tablespoons cooking oil to skillet preheated over high heat. Add sliced pepper and quickly saute for 1 minute; leave them crunchy. Season to taste with salt and pepper. Set aside to cool.

Mushrooms: Add skillet back over medium-high heat and add remaining 2 tablespoons oil. Add sliced mushrooms. The mushrooms will release a lot of water. Keep cooking until the water has evaporated from the pan. Continue to saute until golden brown. Season to taste with salt and pepper. Set aside to cool.

Assembly: With a sharp knife, butterfly open the flank steak. Place between two sheets of plastic wrap and pound to a uniform thickness on the thinner-side of 1/2-inch thick. Combine the salt pepper, and granulated garlic then season both sides of the meat using all of the spice mix. Position the meat so that the grain is running parallel to your body (this will ensure tender slices for serving). Layer the vegetables over the meat and and lightly press. Roll the meat away from you to form a thick roll (the grain of the meat should be running the length of the roll). Tie with butcher’s string at 2-inch intervals to secure.

Cheese sauce: Melt the butter in a medium sauce pan over medium heat. Whisk in the flour and cook for 1 minute; whisking continually. Slowly whisk in the milk until smooth. Bring to a simmer and cook until thickened to the consistency of cream. Remove from heat and sir in grated cheese until melted and thoroughly combined. Sauce can be reheat over low heat.

Set up grill for two-zone cooking with direct high heat and indirect heat; brush and oil grates before grilling. Place a drip pan under the grates on the indirect side.

Over direct heat, starting seam-side down, sear the meat well on all sides. Move to the indirect side of the grill over the drip pan. Close the grill cover and continue cooking for 15 to 20 minutes or until the internal temperature reaches 125°F to 130°F. This dish is best if not cooked beyond medium. Remove from grill and let rest for 10 minutes before slicing. Slice into 1-inch rounds and removing the strings as you go. Serve hot or at room temperature. This makes for an impressive buffet dish with a little cheese on the side!

Assemble as directed. Preheat the oven to 350°F. Heat an oven-proof grill pan or large skillet over medium-high heat. Brush pan with oil and place the steak roll in seam-side down and sear on all sides. Transfer to the oven and bake until until the internal temperature reaches 125°F to 130°F. Finish as directed.